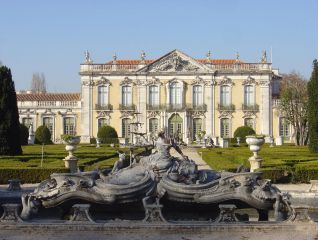 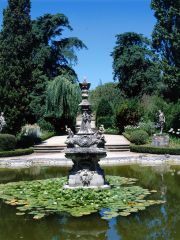 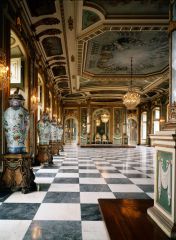 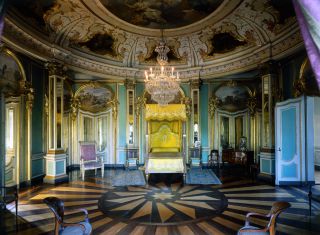 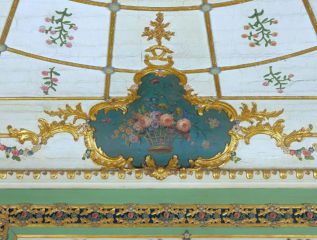 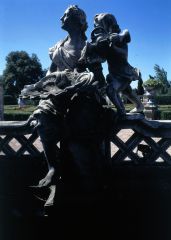 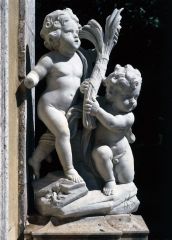 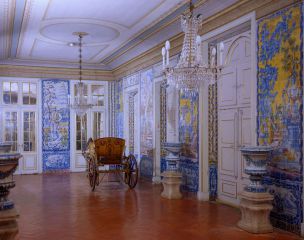 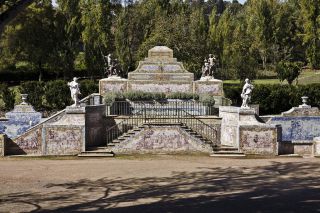 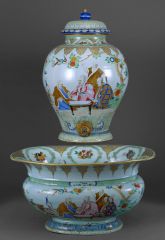 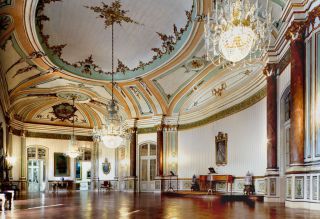 The fire at the Palace of the future King Pedro (the former palace of the Castelo Melhor family or “Corte Real” family) was providential in that the court had a self-interest in Queluz. Therefore, some time after 1747, building of the future Queluz Palace commenced. The configuration of the façades facing the Court of Honour and the Pênsil Garden date from this period. With a late Baroque and cosmopolitan style, the dimensions of the house are not large. When the young Pedro married Queen Maria I, the Palace assumed a state function and was adapted for court ceremonial use and as an occasional royal residence. In 1758, under the direction of Jean-Baptiste Robillion, the palace acquired a “French” ambiance. Jean François Cragnier, Pierre Larrie and Jacques Antoine Collin remodelled the “French-style” interior decoration of the ceremonial rooms assisted by great Portuguese masters, among whom the carver, Silvestre Faria Lobo, stands out. As a result, the building has no stylistic homogeneity, having taken on the Baroque and Rocaille styles with Neo-classical details.

The original centre of the palace is located to the right of the square from where the palace expanded southwards. Mateus Vicente de Oliveira – the first architect to work on the new palace – began by designing a ceremonial façade on a receding rectangle; this opened up a second rectangular area. From here two concave and symmetrical wings form a Baroque square and a defining reception axis. As a result, despite its small dimensions, the building is a monumental ground-level palace. The façades are designed to be seen from the gardens.

A summer palace belonging to the Portuguese court which developed around a former palace. From the outside, the main façade forms a semi-circular plan around a Neo-Classical statue of Queen Maria I by Joaquim José Aguiar. The interior has a U-shaped floor plan embracing a “French” style garden with other wings bordering the park.

Exterior view from the Pênsil Garden

Perhaps one of the best palace façades of the Portuguese Baroque, it combines traditional Portuguese features with Classical precision. The triangular pediment, adorned at the tympanum with garlands, averts the solemnity of a façade which is the keynote of the garden views. 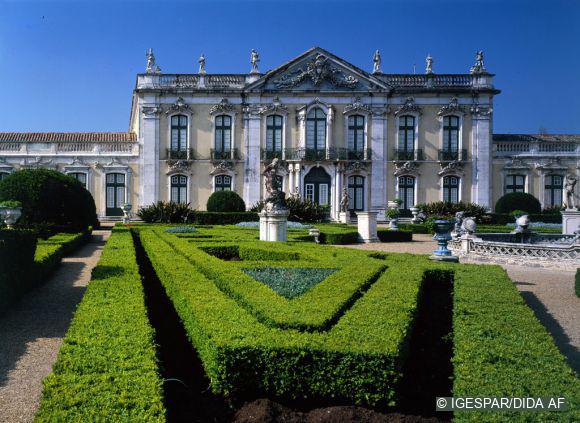 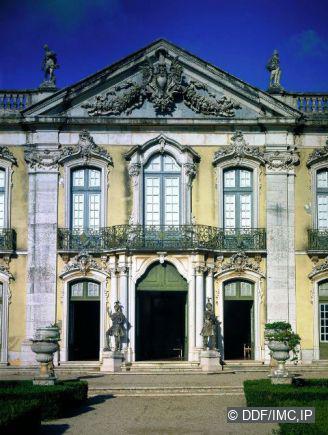 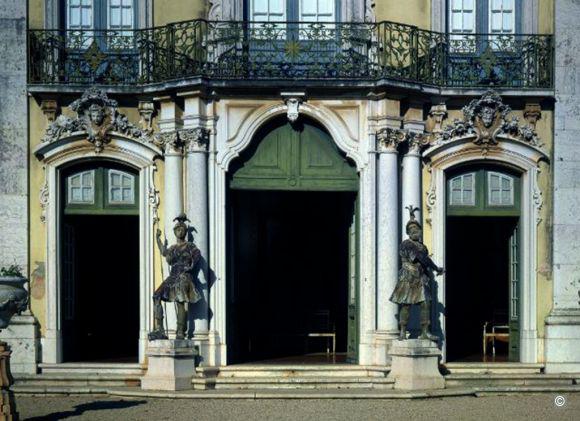 The Throne Room, also known as the Great Room, is the largest of the palace's three state rooms. Construction began in 1768 when the marriage of Dom Pedro to the future Queen Maria I demanded a large area for official audiences. Designed by the architect, Jean-Baptiste Robillion, the new room was built in the Rococo style with carvings by the sculptor and wood carver, Silvestre de Faria Lobo. The paintings on the ceiling represent Faith, Sun, Hope, War, Justice and Charity and were executed under the direction of the painter, João de Freitas Leitão. Manuel da Costa, António Berardi and Manuel do Nascimento assisted him. 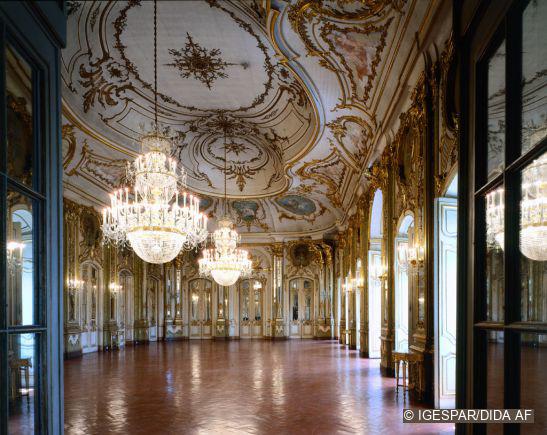 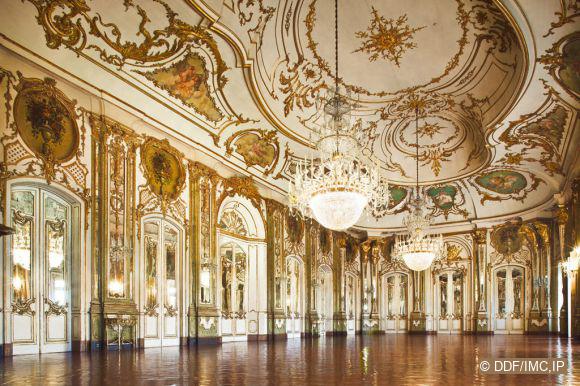 Designed by Robillion, the Pavilion is sometimes considered one of Portugal's first Neo-Classical buildings. However, it is no more than an expression of the French Baroque – obviously more “Classical” – attached to the overall palace form. It has two floors and a considerable monumentality, emphasised by the Stairway of the Lions. 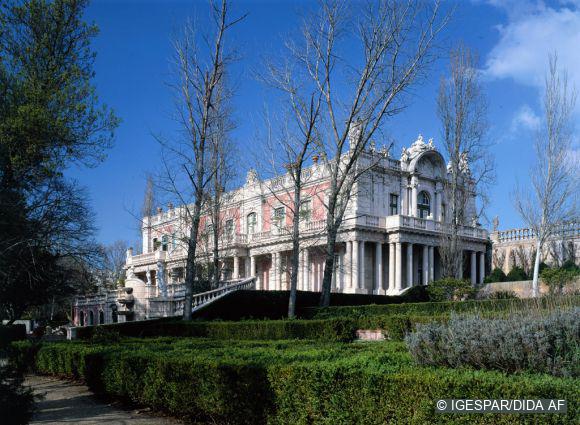 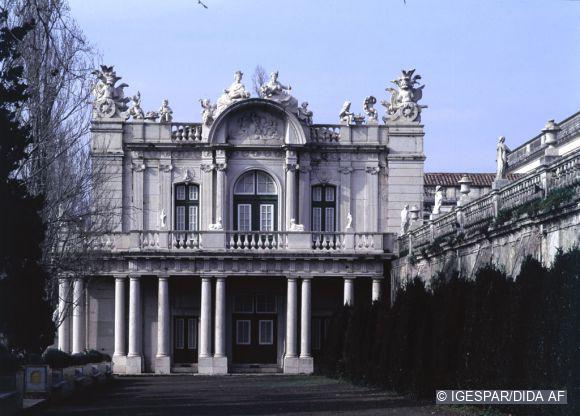 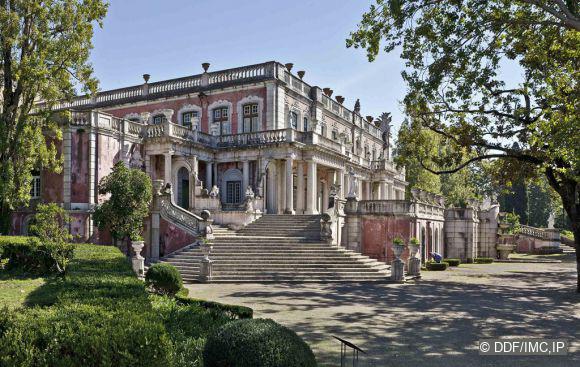 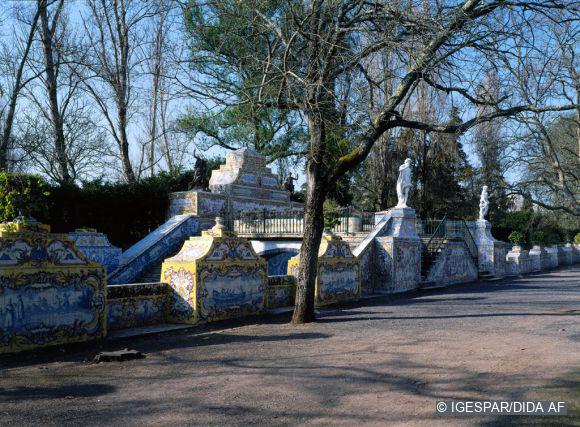 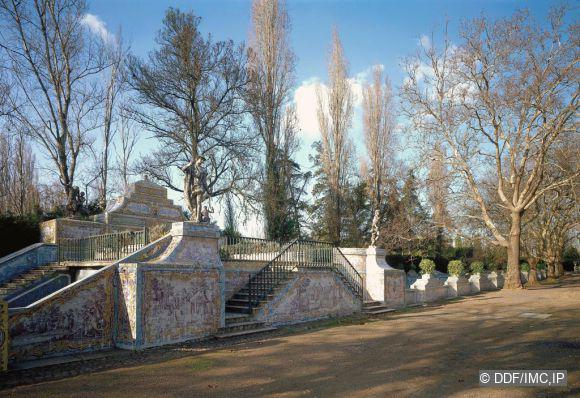 Expansion of the garden was possible after resolution of the uneven land quotas and the relatively rough excavation. The garden's first designer was the Dutchman, Jan van der Kolke, who followed the plans of Robillion. The expansion followed a structure typical of the Portuguese “farm”, purchasing the surrounding land to create a formal garden, a recreational garden and a large area for cultivation, the Quinta Real. 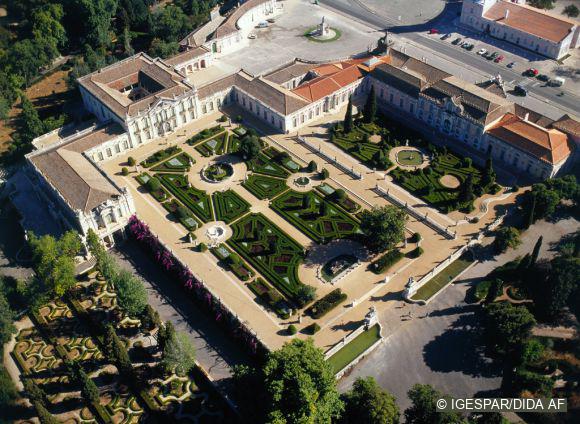 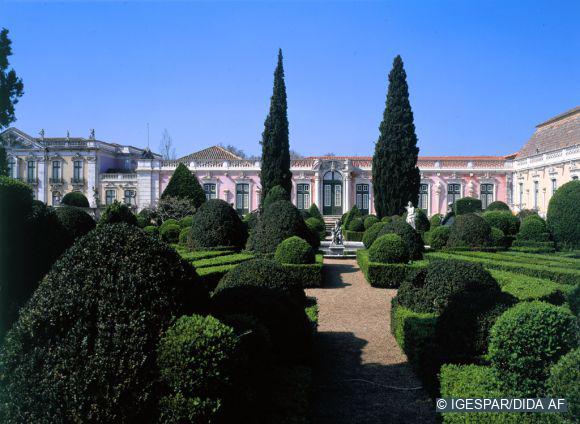 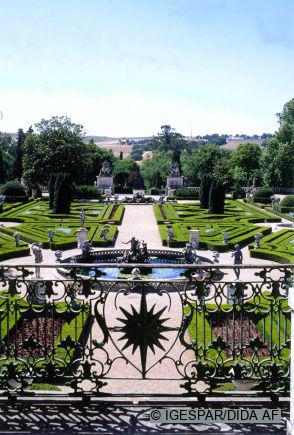 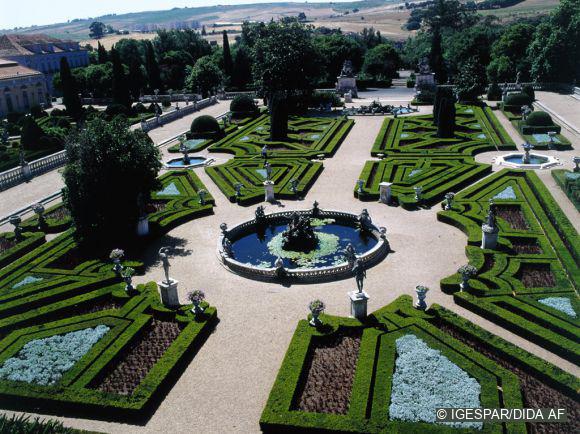 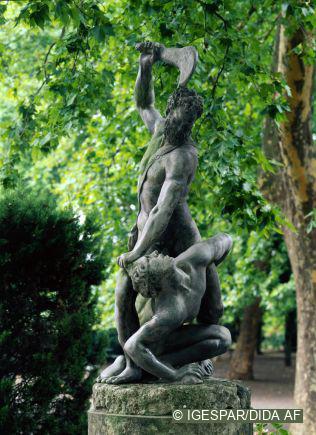 The Neptune Fountain is perhaps one of the most remarkable pieces of 17th-century Baroque stonework in Portugal. Originating during the period of the Castelo Melhor, the fountain was commissioned in Rome shortly after 1675 , 1675 by Luis de Meneses, Count of Ericeira and Portuguese Ambassador in Rome, and made specifically for his Lisbon palace of Anunciada where it was installed in the gardens. After the earthquake of 1755, the fountain fell into the hands of other owners and ended up in several different locations. It was finally purchased by the state and placed in the gardens of Queluz in the first half of the 20th century. Today we know it was probably commissioned from Gian Lorenzo Bernini (the “vernino” as he is referred to in Portuguese documentation) who delegated work on it to Ercole Ferrata. 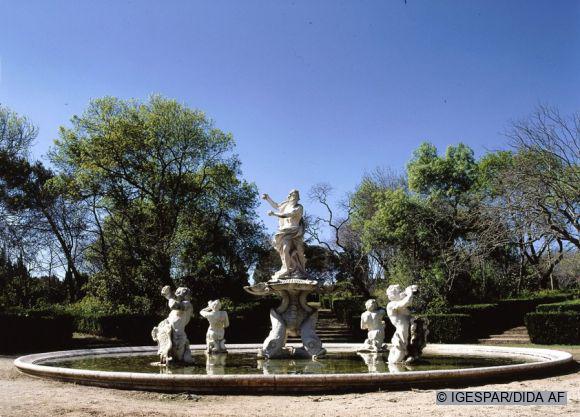 CV:
Paulo Pereira holds an MA in Cultural Studies and has been a speaker at numerous seminars and congresses in Portugal, Spain, France, Italy, the United States and Brazil. Paulo has co-ordinated and published books about Portuguese art and history, some of which are award winning. He is curator of several exhibitions held in Portugal, Ghent, Brussels and Berlin and been a contributing author for several exhibition catalogues. He has exercised managerial roles within the Town Hall of Lisbon, was Vice President of the Portuguese Heritage Institute (IGESPAR) and is a lecturer at the Technical University of Lisbon (Faculty of Architecture).
Translation by: Lili Cavalheiro, Cristina CorreiaCristina Correia

CV:
Cristina Correia is a History graduate and, since 1985, a Senior Teacher of History at the Eça de Queirós Public High School, Lisbon where she also lectures in Portuguese Language and Culture for non-native speakers. From 1987 to 1998 she was involved with youth affairs, primary prevention and the Camões Institute. She is Vice-President and Local Co-ordinator (Portugal) for MWNF.
Translation copyedited by: Mandi GomezMandi Gomez