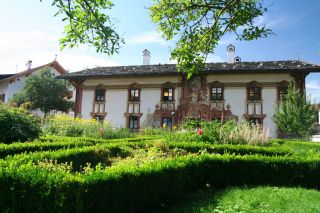 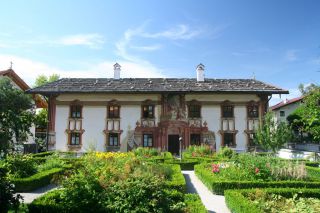 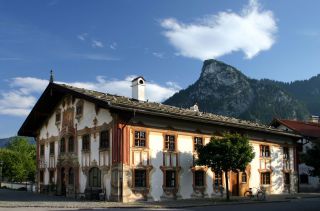 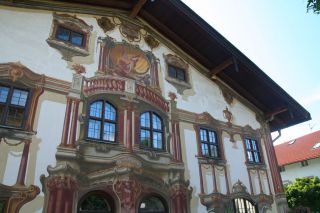 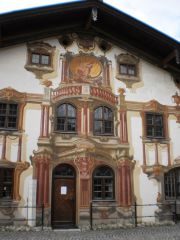 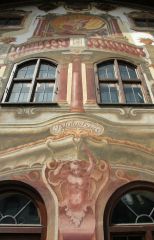 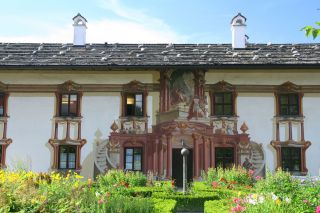 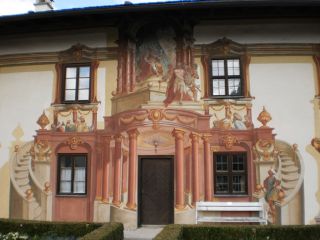 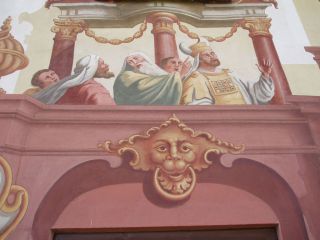 Franz Seraph Zwinck created the illusionistic architectural decoration of the Pilatushaus in 1784. Due to restorative works – by Franz Hartmann in 1910 and Ludwig Magnus Hotter in 1960 – the facade painting is no longer in all parts in its original state. To rectify this, another restoration took place between 1985 and 1986.
At the time the façade paintings were created, the house was owned by Anton Lang who was one of the most famous long-distance traders of private devotional carvings typical in Upper Bavaria at the time.
One can assume that the patrons of such “Lüftlmalerei” were wealthy citizens who were aware of the arts and wanted to express their confidence and status. The painted houses can thus be interpreted as prestige objects for the owner.

Two façades of the Pilatushaus must be emphasised because of their symbolically valuable biblical scenes which are virtuously integrated into the real architecture of doors and windows. The effect is supported by the depiction of shadows, almost perfectly blending the trompe l'oeil with the real features of the building, in order to trick the observer.
The south façade of the house, also known as the garden side, seems to have a round portico supported by columns above and before the entrance door. Two painted stairways lead up on both sides of the portico to pedestals on which human figures are displayed, which are commonly termed as pharisees. Between these pedestals, Pontius Pilate is sitting on a throne, where, at his feet, there is a kneeling Jesus Christ. It is assumed that the owner of the house took part in the local Passion play in the role of Pontius Pilatus, thus possibly giving the house its name. Typically Baroque architectural elements, along with floral and figural forms, frame the images.
The gable of the east side of the house shows a Resurrection scene in a shell-shaped niche between two windows. On the balcony one can find the fleeing keepers of the grave. The figure on the right is leaping over the balustrade in an alarmed, but slightly unnatural movement. The two lower zones of the façade are decorated exclusively with painted architectural elements and seem to be separated from the gable zone by a cornice. This side of the building is dominated by illusionist architectural painting of the balcony, the cornice, the window frames, diverse arrangements of columns, a coat-of-arms in a cartouche and other such ornamental elements. The clever use of perspective layering invokes an interpretation pointing towards Baroque theatre architecture.

The Pilatushaus is one of the main works of Franz Seraph Zwinck, the so called “Lüftlmaler”, and also a unique example of the special kind of facade painting named after him that is so typical for Upper Bavaria. The “Lüftlmalerei” is characterised by stunning trompe l'oeil and mostly religious scenes that have symbolic value. Based on Italian models, the style spread throughout the towns and rural areas of Bavaria.

Travelling and Exoticism | Trade and cultural interaction Ephemera, Festivals and Theatrical Representation | The theatre of the Church The Ascension of the Bourgeoisie | Trade and Festivities