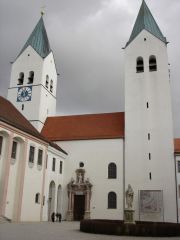 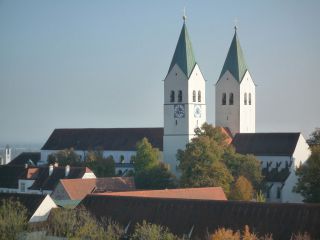 The history of the Cathedral of Freising goes back far into the Middle Ages – even the current structure is based on the five-nave, originally flat-roofed (1481–83 the nave was vaulted) Romanesque basilica. In 1621 the interior was modernised for the first time according to plans of Hans Krumpper. The wall structure still dates from this time. The final shape was given to the cathedral in 1724, when Bishop Johann Franz Eckher assigned the brothers Cosmas Damian and Egid Quirin Asam with the renewal of the presumably dilapidated church, on the occasion of the 1000th anniversary of the foundation of the diocese by St. Corbinian. This anniversary coincided with two personal jubilees for Bishop Eckher: He celebrated his 30th anniversary as bishop and his 50th as priest. The rebuilding of the cathedral can therefore be seen as a project for the personal prestige of a minor Bavarian noble whose intention was to confirm his claim to power and standing.

Situated on a hill above the town, the cathedral with its two towers is widely visible. From the outside, nothing indicates the Baroque splendour of the interior – the simple Romanesque exterior remains intact to this day. On the other hand, the interior unites all phases of construction and style to create a unique composition, which accounts for Freising Cathedral’s fame: the two arcades, forming the wall of the middle nave, are united my means of colossal pilasters. An entablature separates the wall from the vault, and, on the other hand, offers a stylistic bridge to the ribs of the vault, where finally, the Asam’s Rococo stuccowork unfolds in full splendour.

In two major phases, the medieval substance of the venerable cathedral of the Bavarian diocese Freising was transformed into one of the most splendid Baroque churches in Bavaria. The result is an outstanding unification of various levels of style, mainly due to the lush, all-embracing decorations of the brothers Cosmas Damian and Egid Quirin Asam.

Vault of the middle nave

The Asam's paintings and stucco form an inseparable symbiosis; even the frescos participate in a decorative system, unfolding in front of a painted ground of brocade. The impetus to unite the genres becomes most apparent in the painted trompe l'oeil cupola, following the style of Roman examples (S. Ignazio and Il Gesù). While the high altar is dedicated to the Virgin Mary, the ceiling represents the second patron, St. Corbinian. The frescos show (starting in the west): the Virtues of St. Corbinian Annihilating the Vice and The apotheosis of St. Corbinian; followed by: Theological Virtues, framed by the coat-of-arms of the bishops of Freising; The Enthroned Mother of God (in the trompe l´oeil cupola); and the Adoration of the lamb. 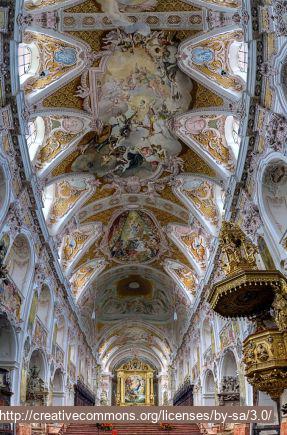 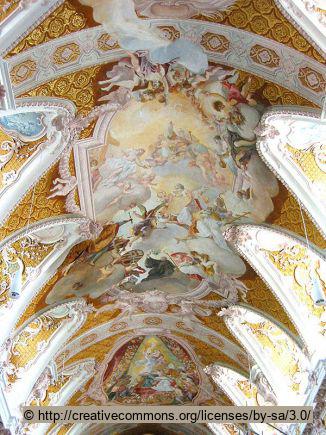 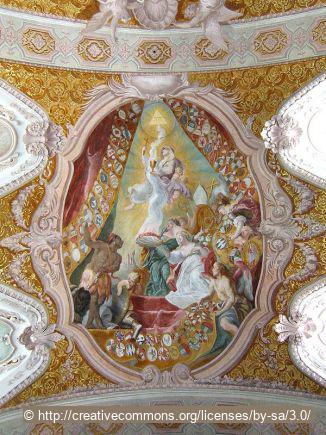 The high altar, designed by Hans Krumpper, is an early example of a combined retable and tabernacle – the latter manufactured on the explicit demand of the Prince-Bishop by Philipp Dirr. The Rubens’ altarpiece is a replica (the original has been conserved in Munich since 1927). It shows the “Madonna on the Crescent Moon” with the archangel Michael triumphant over evil, especially paganism. 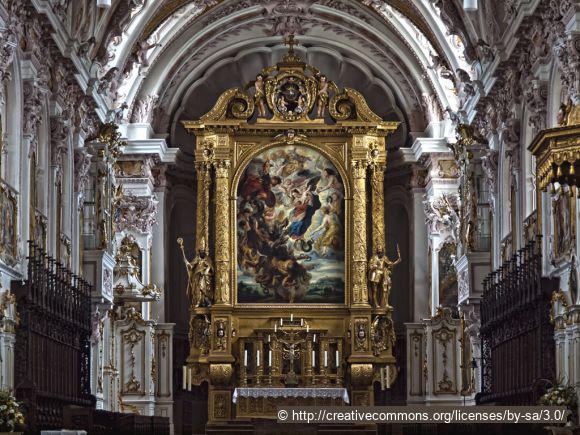 Apse of the southern aisle

The chapel of the popular patron saint of Bavaria, St. John Nepomuk (today, known as the Sacrament Chapel) was designed in 1737/38 by Egid Quirin Asam. The dynamically curved architecture and the ecstatic sculptures of the patron and his namesakes, John the Baptist and the Evangelist, refer clearly to designs of the Roman High Baroque. 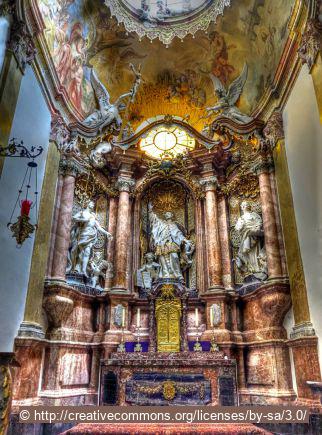