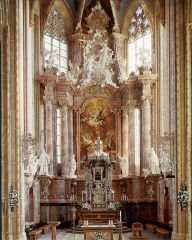 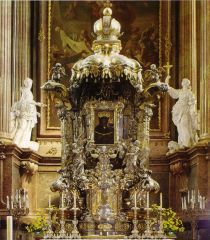 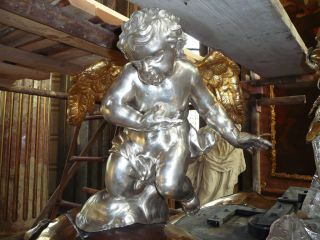 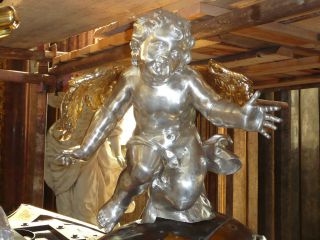 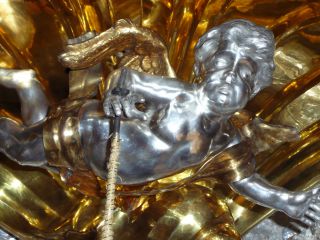 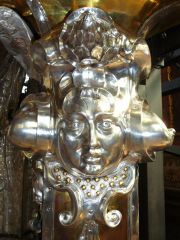 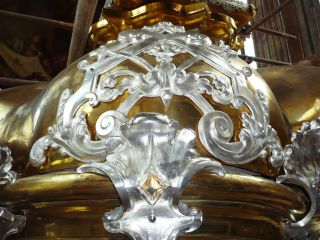 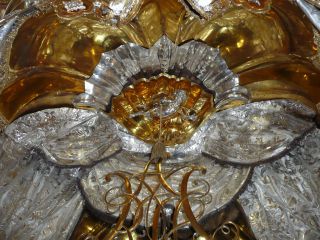 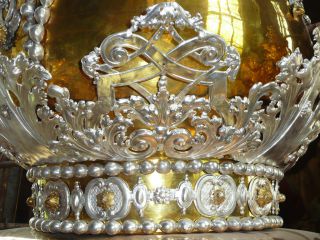 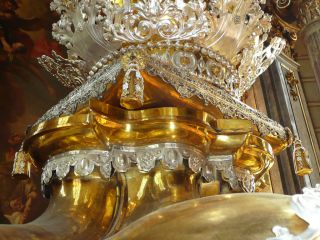 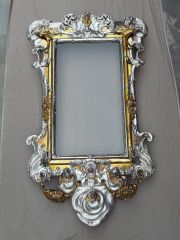 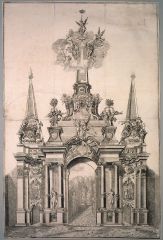 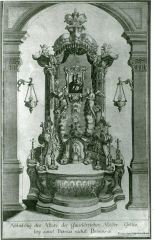 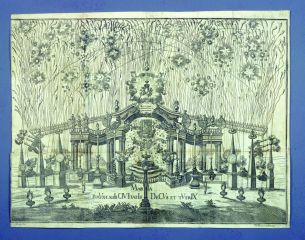 The Moravian palladium; Thaumaturga; The Madonna of Old Brno

The Coronation of the Miraculous Picture of the Virgin Mary in Brno was one of the biggest religious celebrations to take place in Czech territory. On the occasion, the Augustinians ordered a retable and a liturgical set from the famous goldsmiths’ workshop in Augsburg, to complement the picture. The altar was designed by C. F. Rudolph and probably executed by J. G. Herkommer, a relative. The models of angels were possibly created by Schauberger, a sculptor from Brno. The altarpiece, transported from Augsburg on the Danube, was installed in the newly constructed Marian Chapel in the Church of St. Thomas and decorated with J. J. Etgens’s paintings. In 1776, during cleaning, decorative elements were added by a Brno silversmith, Richter. In 1783 it was transferred to the dissolved Cistercian convent in Old Brno (acquired by the Augustinian order) where it now makes up part of the high altar in the Church of the Assumption of the Virgin Mary.

The altar is copper covered with silver plate, partially gilded. Some parts are cast. Cartouches under the picture and six wrought candlesticks feature emblems and the initials of Abbot O. Zirkl painted on enamel.

The Coronation of the Miraculous Picture of the Virgin Mary in Brno was one of the biggest religious celebrations to take place in Czech territory. For the occasion and to complement the picture, the Augustinians ordered a retable and a liturgical set from the famous goldsmiths’ workshop in Augsburg, said to have been donated by Emperor Charles IV. The image was credited with the salvation of Brno from the Swedish siege at the end of the Thirty Years’ War and was thought to have healing properties and bring about other miracles. Members of major Moravian aristocratic families were traditionally married before the Thaumaturga.

According to a contract dated 4 October 1734, the altar was to be completed by 1 September 1735. Both the altar and coronation set are hallmarked. The original state of the altar is captured by several prints depicting the coronation and there are several descriptions of it.

The Virgin Mary of Old Brno

Second half of the 13th century?

This picture of the Virgin Mary is named after its second location. It was the palladium of Brno, a miraculous picture (Thaumaturga) of the Madonna and Child donated to the Augustinian Monastery in Brno by Emperor Charles IV. Members of major Moravian aristocratic families were traditionally wedded before the Thaumaturga. The reliquary, originally embedded in the child’s heart, makes up the clasp of the Madonna’s dress. Relief letters, gilded crowns with precious stones, and a chain come from the period of the picture’s coronation and its incorporation into the new altar. The image was credited with the salvation of Brno from the Swedish siege at the end of the Thirty Years’ War, as well as with healing properties and other miracles. 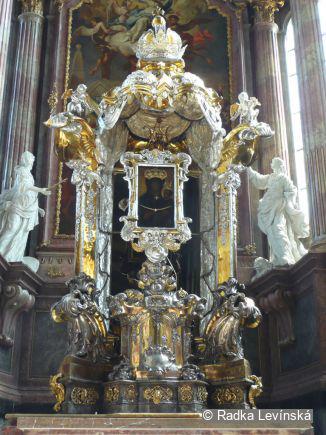 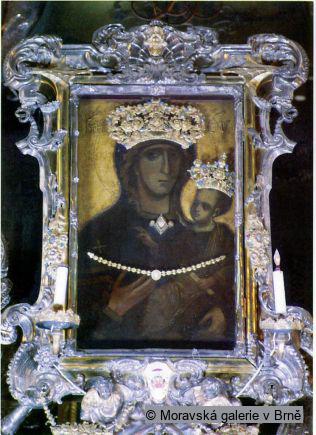 The radial monstrance is decorated with vine leaves and grapes, the Eucharist, symbol of Christ’s blood. Below the casket is a relief of the Madonna and Child; at the top, under a baldachin, is God and the dove of the Holy Spirit. Cartouches on the richly wrought pedestal feature paintings on enamel: the Madonna of Old Brno and half-figures of the order’s saints. 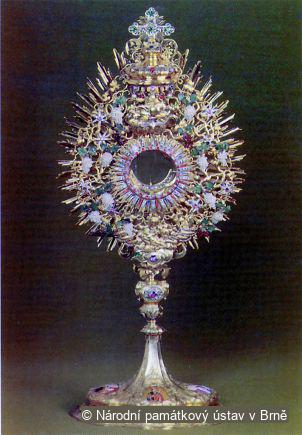 The spiral part of the sceptre is covered with acanthus leaves and multi-coloured cut glass. In the central halo there is an image of the Madonna of Old Brno transferred into relief form as a cast statue. 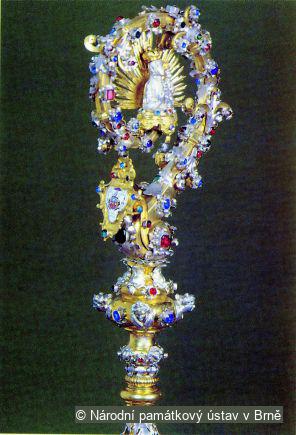 Apart from the chalice decorated with half-figures of the order’s saints painted on enamel, and jugs for Abbot Zirckl, there were two other chalices for assisting priests, with scenes from the Lfe and Torment of St. John of Nepomuk and the Passion, created in the Augsburg workshop for the coronation. 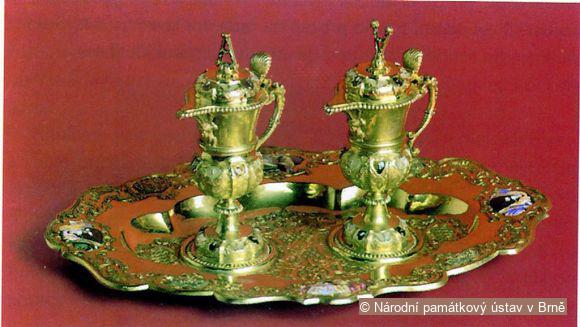 Fabrics were essential elements of the coronation ceremony. Viennese embroiderers frequently worked for the monastery. In comparison with other preserved Paraments these appear rather poor. The most spectacular part of the coronation set was the altar with an altarpiece. Accompanying elements were subordinated to it through their reduced decorativeness.

CV:
Zora Wörgötter studied Applied Painting at the Secondary School of Applied Arts, Video Art (Faculty of Fine Arts) at the University of Technology in Brno and Art History and Ethnology (Faculty of Arts) at Masaryk University, Brno. She has worked at the Moravian Gallery since 1997 and was curator of the Ancient Art Collection up until 2008. Specialising in Dutch and Central European painting of the 17th and 18th centuries, she has participated in the preparation of several exhibitions, catalogues and research projects in the Czech Republic and abroad, and published in the Moravian Gallery Bulletin, Opuscula historiae artium, and other journals. She is co-ordinator of the Art History Database www.ahice.net for the Czech Republic.
Copyedited by: Jiří KroupaJiří Kroupa

AFFILIATION: Department of the History of Art (Faculty of Arts) Masaryk
University, Brno

CV:
Professor Jiří Kroupa studied Art History, History and Sociology Masaryk University, Brno. He was a curator at the Kroměříž Museum and the Moravian Gallery in Brno before joining the staff at Masaryk University in 1988 (Head of the Department 1992–2002; Professor 1999 to present). His particular fields of interest are in the history of architecture, 18th-century cultural history and the methodology of art history. His long list of publications includes an edition on the architect Franz Anton Grimm and an essay “The alchemy of happiness: the Enlightenment in the Moravian context”. He was contributing editor for the volume Dans le miroir des ombres. Moravie a la age baroque. 1670–1790 (2002).
Translation by: Irma Charvátová
Translation copyedited by: Mandi GomezMandi Gomez

Devotion and Pilgrimage | Specifics of devotional iconography Ephemera, Festivals and Theatrical Representation | The theatre of the Church