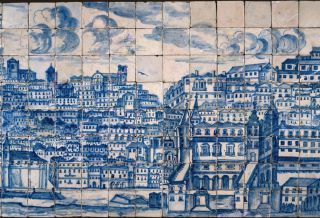 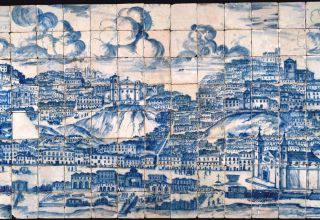 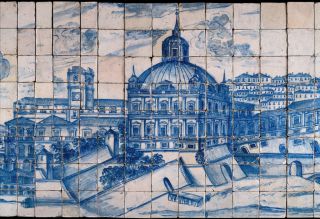 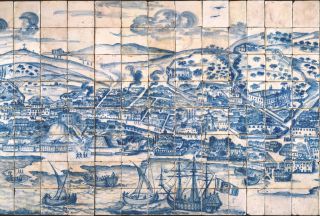 Palace of the Counts of Tentúgal, Lisbon

A tile panel (azulejos) painted blue on white that records Lisbon before the earthquake of 1755. A vast panoramic view of the capital and its outskirts, the panorama extends along the riverbanks from the Palace of the Counts of Miranda at the westernmost point to the Convent of St. Saint Francis in Xabregas, at the easternmost point.
The focus is on the centre of political and economic power which included the city developments around the Royal Palace of Ribeira. This is immediately followed by the Palha Sea, flanked on the left by the Church of St. Gens and on the right by the Convent of St. Vincent de Fora. On the riverfront are the Terreiro do Paço and the Ribeira Velha Market. Nearby are the shipyard of Ribeira das Naus, the Royal Palace and St. Paul's Church.
On the hills above are the convents of St. Francis of the City and Our Lady of Monte do Carmo; Loreto, Encarnação and St. Roch churches and the Convent of St. Peter of Alcântara.
Along the foreshore are the palaces belonging to the Dukes of Aveiro, the Marquises of Abrantes, the Counts of Murça and the neighbourhood called Mocambo. The western area is more spacious. The Alcântara, Junqueira, Pocinho and Algés bridges cross the river defended by the forts of Alcântara, St. John of Junqueira, Our Lady of Conception and the imposing Tower of Belém. On a second plan the Sacramento, Livramento, Flamengas, St. Jerome, Our Lady of Bom Sucesso and Catarina-a-Velha convents are prominent as are the chapels of St. Christ and St. Hieronymus.
Near the river are the royal palaces of Calvário, Santo Amaro à Junqueira Quinta, belonging to the Counts of Aveiro; Quinta da Calheta, the Palace of Quinta da Praia belonging to the Dukes of Cadaval, and the Palace of the Counts of Miranda.
The eastern zone depicts the Church of St. Engrácia, the convents of Santos-o-Novo and Madre de Deus and, in a separate panel, the Convent of Saint Francis in Xabregas.

Lisbon is recorded on this tile panel measuring almost 23 metres wide, and produced before the earthquake of 1755. Depicting approximately 14 km of the riverbank, it shows a vast panoramic view of the capital and its outskirts between the Palace of the Counts of Miranda, the westernmost point, and the Convent of Saint Francis in Xabregas, the easternmost point.

How date and origin were established:

This panel is currently attributed by stylistic analysis to Gabriel del Barco, a Spanish tile painter and decorator who arrived to Portugal in 1669 and died probably around 1703.

How Object was obtained:

Purchased by the Marquis de Sousa Holstein (1838–1878) for the Royal Academy of Fine Arts and incorporated into the Fine Arts and Archaeology collection at Alvor Palace in Lisbon, today known as Museu Nacional de Arte Antiga. Displayed there from 1903 until 1960, it was transferred to the Museu do Azulejo at that time the ceramics department of the Museu Nacional de Arte Antiga.

CV:
João Pedro Monteiro is a History graduate with an MA in Art, Heritage and Restoration. He has been curator in the Research and Archive Department at the National Tile Museum since 1988. He has curated various exhibitions on Tiles and Ceramics and written several articles and essays on these themes, published in exhibition catalogues and magazines, both in Portugal and abroad.
Translation by: Lili Cavalheiro, Ana Anjos Mântua
Translation copyedited by: Mandi GomezMandi Gomez