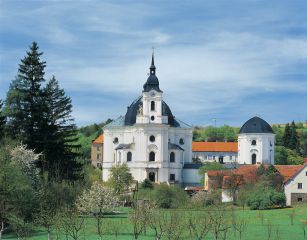 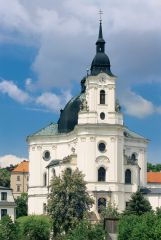 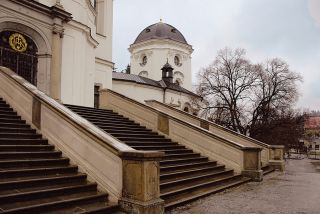 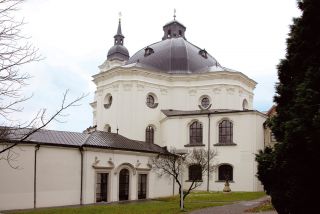 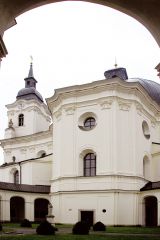 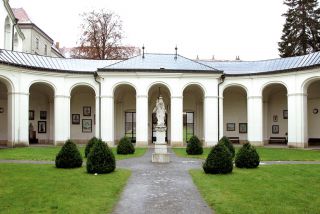 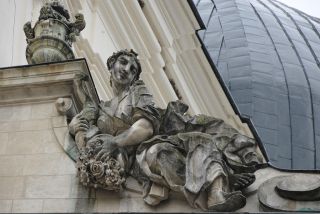 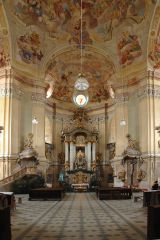 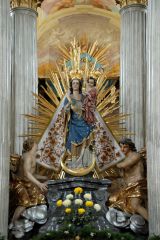 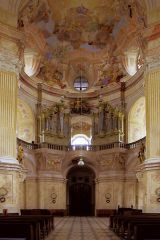 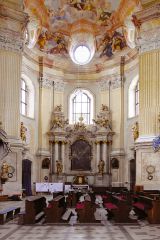 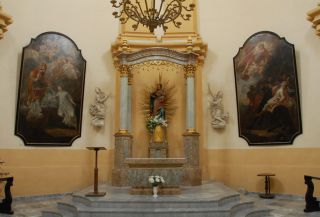 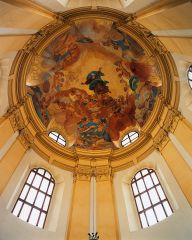 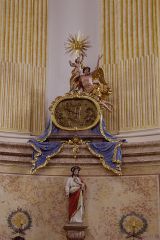 Pilgrimage Church of the Name of the Virgin Mary, Křtiny

Legend has it that Saint Cyril and Saint Methodius once baptised pagans in the Křtiny Valley, hence its old name, Vallis baptismi. One of the oldest pilgrimage sites, oral tradition further credits the place with an appearance of the Virgin Mary of Křtiny in 1210 among the blossom from a horse chestnut tree in nearby Bukovinka. The first written record is in a papal decree of 1237. The statue of the Virgin Mary dates from the first half of the 14th century and was probably donated by Jindřich of Lipá. The significance of the pilgrimage site grew during the Thirty Years' War, when it became a destination for two major thanksgiving pilgrimages to the Virgin Mary, Protectoress of the country. The foundation stone for the present church was laid in 1728. When the Premonstratensian order was dissolved in 1784 the incomplete residence was converted into an aristocratic palace (it became state property in 1948). The pilgrimage tradition has survived and Křtiny is among the most visited of its kind in Moravia.

The white frontage, inventively set into its environment, is decorated with statues by I. Lengelacher, installed in 1740. The unique architectural concept of the church lends a certain magic to the whole area. Santini was acquainted with the numerical symbolism of the Jewish Cabbala, which was also developed by prominent Catholic scholars, and applied its principles in his extraordinary compositions. The ground-plan layout is a circle with internal and external pentagons symbolising the Marian star. The partial merging of the central and side spaces turns a cross-shaped schema into a monumental four-conch whole.

Legend has it that Saint Cyril and Saint Methodius once baptised pagans in the Křtiny Valley. The significance of the pilgrimage site grew during the Thirty Years’ War. The architect, Santini, was acquainted with the numerical symbolism of the Jewish Cabbala, which was also developed by prominent Catholic scholars, and he applied its principles in his extraordinary compositions. The ground plan symbolises the Marian star. The ceiling painting is a metaphorical celebration of the Virgin Mary as the embodiment of Divine Wisdom.

With the dissolution of the Zábrdovice Monastery the written records and plans disappeared and only chronicles from 1650–1710 have survived. Individual construction phases are known from prints. Records of pilgrimages are kept in the Křtiny Parish Archive; several pilgrimage books originate in the late 17th century.

The model shows the ideal appearance of the church and residence that were not completed. Santini’s original design did not include a tower in the frontage, while the shape of the church held more true to the Marian star, as in other of the architect’s designs. The complex came into existence through the construction of the new church and its link with the Chapel of St. Anne; the chapel opposite was to be dedicated to St. Joseph. 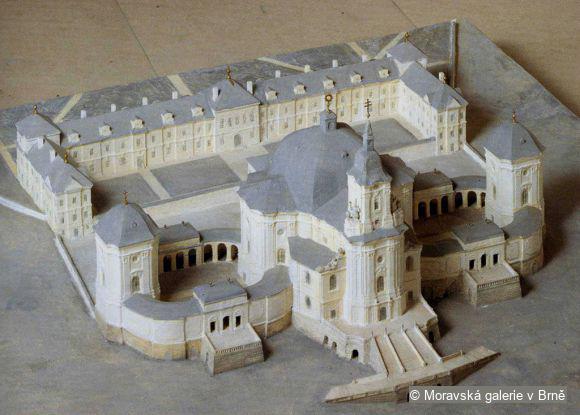 Celebration of the Virgin Mary

The ceiling painting blends in with the architecture illustrating apocrypha from the Book of Sirach. The painting is a metaphorical celebration of the Virgin Mary as the embodiment of Divine Wisdom: angels with mirrors serve to enlighten visitors. 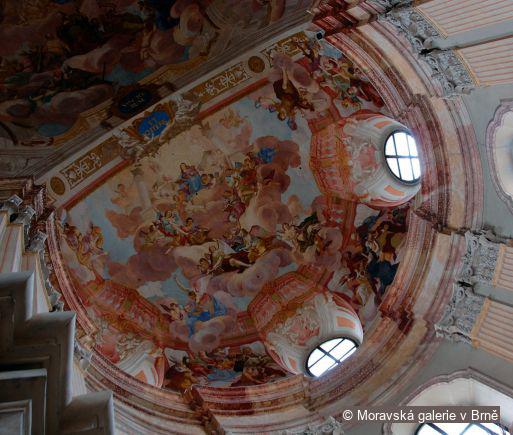 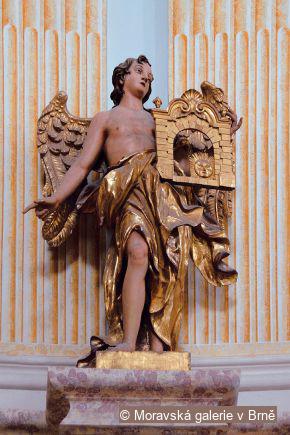 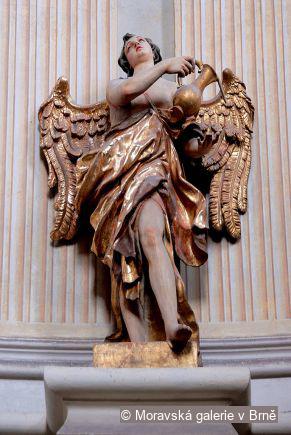 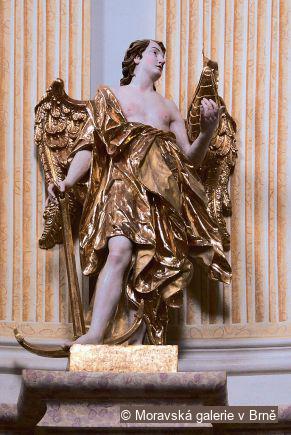 The side-altar painting commemorates the penultimate abbot of the Premonstratensian Monastery (and possibly also the creator of the complex iconography of the ceiling paintings) whose tomb lies in front of the altar. A picture of Roman martyrs, protectors from unfavourable weather, is framed by an altar by O. Schweigl. The function of the saints as the country’s protectors may also be understood symbolically: a 1772 decree considerably restricted the organisation of pilgrimages, while an imperial patent from 1783 prohibited them completely.
The picture in the attachment is of St. Gilbert, the abbot’s favourite saint. 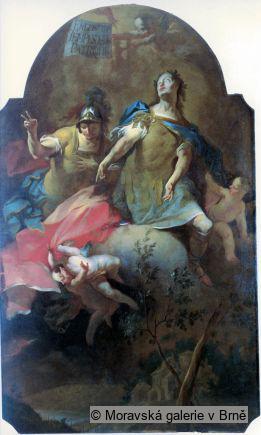 View of Brno and the Premonstratensian Monastery in Zábrdovice

The church galleries contain a number of votive pictures brought by pilgrims. This monumental canvas depicts the Brno Basin with the Zábrdovice Monastery which administered the pilgrimage site. The picture was donated by the canonry as an expression of thanks for the protection of Brno during the siege by Prussian and Saxon armies in 1742.

Zora Wörgötter "Pilgrimage Church of the Name of the Virgin Mary, Křtiny" in "Discover Baroque Art", Museum With No Frontiers, 2022. https://baroqueart.museumwnf.org/database_item.php?id=monument;BAR;cz;Mon11_F;17;en