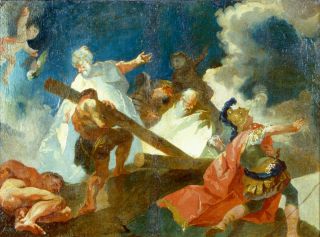 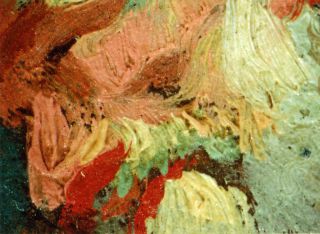 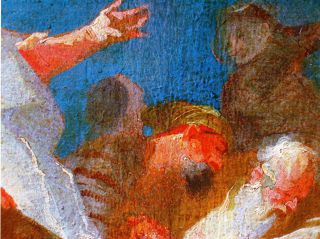 F. A. Maulbertsch, Discovery of the Holy Cross

Discovery of the Holy Cross

Oil on paper on canvas

The scene depicts the discovery of the cross upon which Jesus died and the verification of its authenticity. The search for the cross was initiated in 324 by St. Helen, mother of the Roman Emperor Constantine the Great, who legalised the Christian faith by an edict in 313. These figures are not represented in this sketch executed for part of a ceiling painting in the Provost Church of St. Hyppolith in Hradisko near Znojmo, owned by the Order of the Knights of the Red Star.
The discovery, erection and celebration of the cross are arranged in chronological order along the perimeter of the church cupola. In the ancient Roman empire, the cross, tool of the most degrading capital punishment, was designated for slaves and rebels. For Christians, it became the epitome of the redemption of mankind through Christ. The scene is set on Golgotha, where three identical crosses have been excavated. The crosses were laid on dead bodies, and when the genuine cross was applied, the dead person miraculously came to life. In the picture, this is the reclining figure on the left. Maulbertsch's masterly use of light, dramatic chiaroscuro, expressive exaggeration of shapes and rhetorical gesture, is particularly marked in the lifting of the cross. Accents of red and dark blue lend mystery to the picture.
The final fresco differs from Maulbertsch's sketch only in the decorative detail and colour scheme, which appears less contrasted when seen in large format and makes allowance for the white-green-yellow Rococo stucco decoration of the interior. Josef Winterhalder Jr., later Maulbertsch's most faithful disciple, created his first independent paintings, side altar altarpieces, in this church. The cupola murals are also associated with a sketch by Josef Winterhalder Jr., Maulbertsch's associate and pupil for the Celebration of the Holy Cross and the drawings for the cupola paintings (Vienna, Albertina).

This sketch for the mural in the cupola of the Church of St. Hyppolith in Hradisko near Znojmo depicts the discovery of the cross upon which Jesus died and the verification of its authenticity. It exemplifies Maulbertsch’s masterly use of light effects, expressive exaggeration of shapes and rendering of rhetoric gestures.

The Provost of the Order of the Knights of the Red Star signed a contract with Franz Anton Maulbertsch for the decoration of the Church of St. Hyppolith on 9 October 1765. The painter was to start work the following spring. He received 900 gold pieces and was provided board and lodging by the order for himself and his two assistants. The sketch or modello was a template for the artist's associates.

Zora Wörgötter "Discovery of the Holy Cross" in "Discover Baroque Art", Museum With No Frontiers, 2022. https://baroqueart.museumwnf.org/database_item.php?id=object;BAR;cz;Mus11;39;en