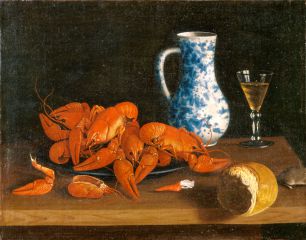 Izbighy Veres of Kassa (Košice) was one of the most accomplished painters of the period in Hungary. According to sources, he executed several commissions in Kassa (Košice), and a number of his still life paintings are in Slovakian and Hungarian collections today. Indications of the Hungarian origins of this painting are evident not only in the signature, but also in the blue-white lead-glazed jar; in addition, the loaf of bread is similar to that seen on a supraport painting by him in Koháry Castle at Szentantal (Antol). In another painting in the Xantus János Museum, Győr, Izbighy arranged a heap of crawfish on a plate in a similar way.
Up until the beginning of the 20th century, discussion of Izbighy Veres' still life paintings was primarily in terms of their symbolic meaning. In this particular painting, however, this is hardly a major consideration as, clearly, it is influenced by the 17th-century still life genre of Austria and south Italy and, considering its style and spirituality, is certainly related to three works of the Austrian “Burgher paintress” Anna Maria Punz (Österreichische Galerie, Vienna), though this one by Izbighy is of an earlier date.

The signed work of István Izbighy (Izbigi) Veres, a painter from Kassa (Košice) shows the influence of Austrian and south Italian still life painting, in particular the work of the “Burgher paintress” Anna Maria Punz. His other works may well have symbolic meaning but symbolism is a minor consideration when considering this particular painting.

The painting is signed and the date established by stylistic analysis.

Mojzer, M., (ed) “Cat. Nr. A. 44.” The Metamorphosis of Themes: Secular Subjects in the Art of the Baroque in Central Europe, exhibition catalogue, Budapest, 1993.

CV:
Terézia Bardi, Vice Director for Research at the National Trust of Monuments for Hungary since 2004, was awarded her MA in History and History of Art at the Eötvös Loránd University in Budapest. After a period of fellowships mainly in Italy, Terézia gained her PhD from the Faculty of Art History at the same university for her thesis Presentation and Representation – the European Reception of the Liberation of Buda in 1686: Feast and Public Opinion. Her main fields of research are 17th-and18th-century Baroque and Rococo: the spectacles, festival decorations and associated iconography – including theatre productions of the period – and interior decoration of historic houses. Since 1988, she has edited a number of art historical books that include some on Oriental art and architecture. She is MWNF DBA’s local (Hungarian) co-ordinator, author and copy-editor.
Translation by: Etelka Rozgonyi
Translation copyedited by: Mandi GomezMandi Gomez

The Ascension of the Bourgeoisie | For Eternal Remembrance