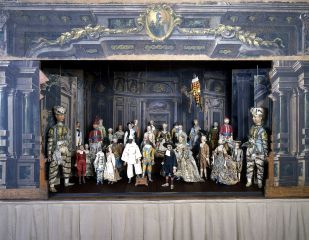 During the third quarter of the eighteenth-century the Albicini family from Forlì commissioned this marionette theatre. The coat of arms of the Albicinis' is on the proscenium. The present backdrop and wings show a “magnificent atrium” painted by an artist influenced by the scenography culture of the Bibienas, especially that of Antonio Galli, who was working at that time in Forlì. The backdrop, with its three vanishing points, applies three corner perspective conveying the idea of a space extending behind the visible scene. The theatre has 5 more backdrops and seven pairs of wings, some of which were painted in the nineteenth-century.
Only some of the marionettes are exhibited; altogether there are 74 male and female figures (some of them are characters from the Commedia dell'Arte), 9 horses and 1 monkey. All of the figures were made in the Veneto. The oldest figures are dated to 1750 ca., so they are older than the theatre of which they are part. The others were made in the eighteenth-century. Even if not produced by the same workshop all the marionettes are characterised by similar technical devices including a movable mouth and jointed limbs which moved with a control bar. Some of these marionettes change into something else, a trick widely appreciated at the time (ladies become dwarves and dwarves become giants).
Puppet theatres were very fashionable in Venice where they were used to represent plays from the Commedia dell'Arte and even by comediographer Carlo Goldoni. They were mostly present in noble residences. During the eighteenth-century this habit spread in the north of the country, unfortunately only few survive and we lack information on their use.

This puppet theatre was painted by an artist influenced by the culture of the Bibienas for the Albicini family of Forlì. It is a rare and precious ensemble thanks to the rich equipment of backdrops, wings and marionettes (74 female and male figures, 9 horses and 1 monkey). It was made in Veneto around 1750.

Purchased by the Italian Ministry of Instruction from the Venetian antique dealer Dino Barozzi in 1921. It was originally sent to the Pinacoteca Nazionale of Bologna as an example of Bibienesque art. In 1930 it was moved to the Museo di Arte Industriale e Galleria Davia Bargellini.

Graduated and specialized in History of Art at the University of Bologna. She is a specialist of medieval illuminating and of Nineteenth-century Bolognese painting. She is presently the curator of Museo Davia Bargellini, one of the Musei Civici d’Arte Antica.
Translation by: Antonella MampieriAntonella Mampieri

CV:
Graduated and specialised at the University of Bologna. She is a specialist in Bolognese late Baroque art, namely sculpture. Among other subjects she has been studying nineteenth-century funerary art in the Bologna monumental cemetery, la Certosa.
Translation copyedited by: Lisa Kelman

Ephemera, Festivals and Theatrical Representation | The age of the theatre